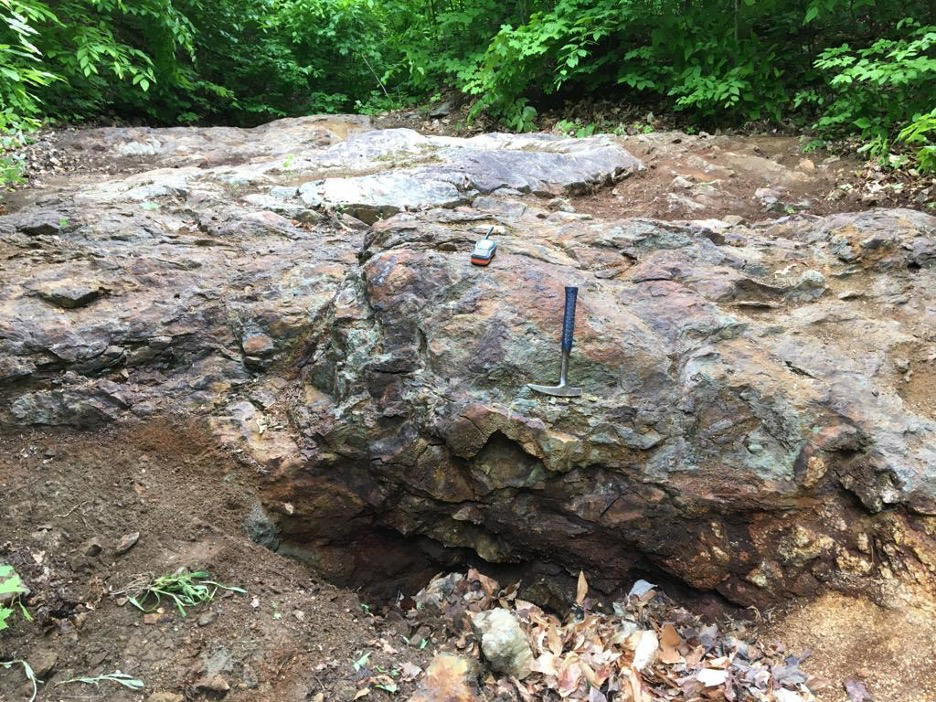 Historical Diamond Drilling
In 2006, Quinto completed a drilling program of six diamond drill holes, which encountered significant copper mineralization including 0.57% Cu over 22.8 metres and 1.27% Cu over 3.8 metres along a 200-metre strike length.

The six short drillholes encountered copper mineralization corresponding with a single, large geophysical anomaly over 450 metres in length and open in both directions. Five other parallel anomalies remain to be explored.

In 2007, five additional diamond drill holes were completed. Four of these holes encountered significant mineralization, as detailed below in Table 1.

Trenching confirmed the presence of disseminated pyrrhotite, chalcopyrite, bornite and massive pyrite in diopside-rich calcosilicate rocks. This mineralization is also present as disseminated within quartz-feldspar-biotite gneisses, marbles and quartzites. The mineralization seems to be found mainly in the hinges of folds, but it is also found in veinlets in a network of sub-vertical fractures oriented E-NE.

About The Zen-Whoberi Project
The Zen-Whoberi property comprises six claims covering 353.2 hectares located north of Mont Laurier, Quebec. It is located in the central metasedimentary belt of the Grenville geological province. The copper mineralization occurs as a skarn in the form of disseminated sulphides (pyrrhotite, chalcopyrite and bornite) in calcosilicate rocks.

Deal Terms
Pursuant to the terms of the Option Agreement, the Company has been granted the right to acquire a 100% interest in and to the Property (the “Option“), which may be exercised as follows:

Upon the Company exercising the Option, the Company will grant to 3EX a net smelter returns royalty (the “NSR Royalty“) totaling 2% on commercial productions from the Property. The Company has the right to repurchase 100% of the NSR for $2,000,000.

Qualified Person
The technical information in this news release has been reviewed and approved by Rémi Charbonneau, P.Geo., a “Qualified Person” as defined under NI 43-101 Standards of Disclosure for Mineral Projects.

About Infinity Stone Ventures
Infinity Stone’s mission is to be a diversified, single source supplier for the critical energy metals being used in the clean energy revolution alongside its established SaaS solution portfolio. The Company’s primary business units include HealthCheck (Stratum Health Technologies LLC) and its energy metals portfolio. Infinity Stone is meeting the demand from battery and wind turbine manufacturers, and energy metals speculators by acquiring 100% interest in critical mineral deposits and occurrences in stable mining-friendly jurisdictions, close to final use destinations in North American manufacturing hubs.

The Canadian Securities Exchange has not reviewed, approved or disapproved the content of this news release.