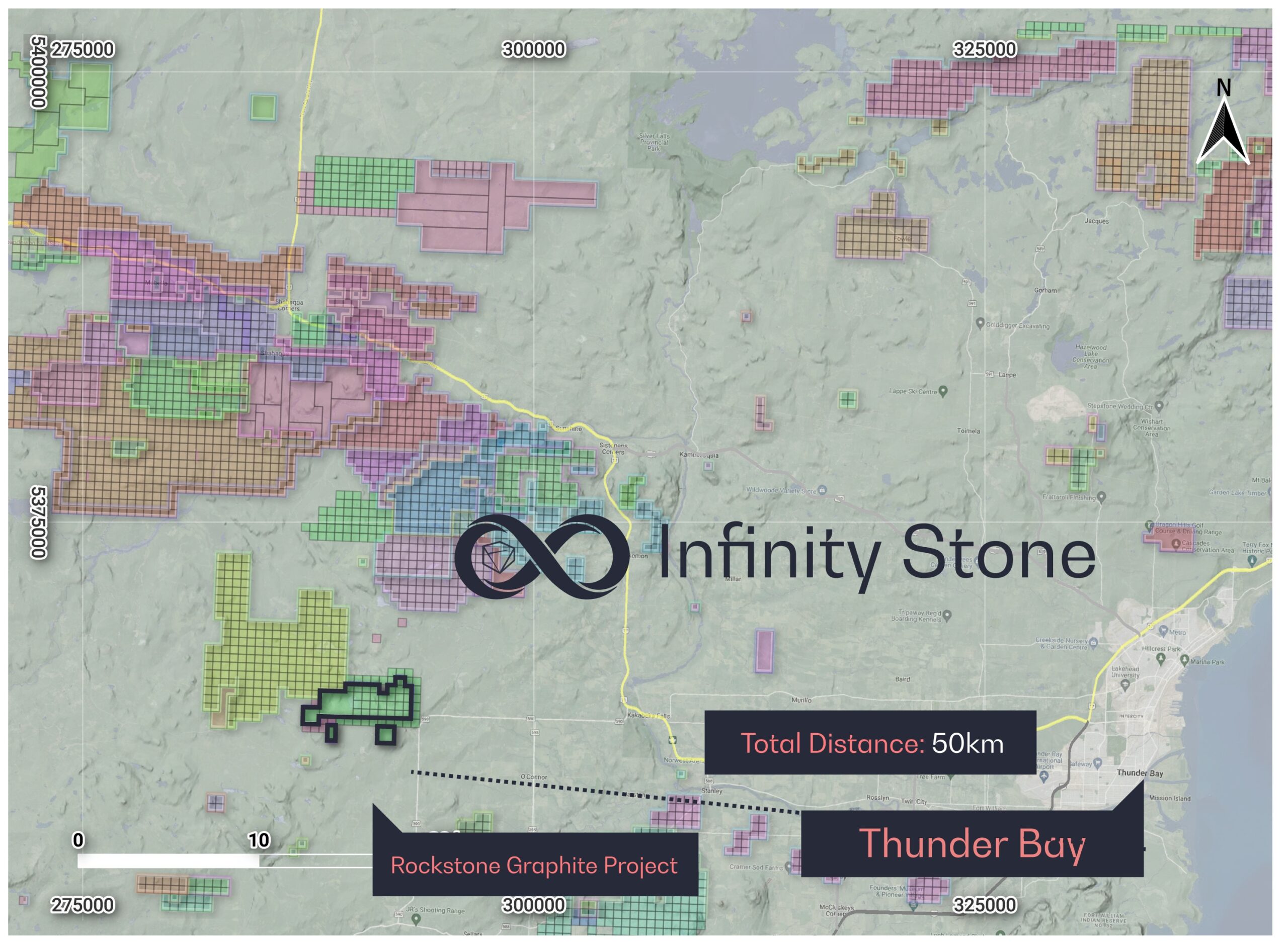 Vancouver, BC, December 9, 2022 – Infinity Stone Ventures Corp. (CSE:GEMS)
(OTC:GEMSF) (FSE:B2I) (the “Company” or “Infinity Stone”), is pleased to announce that is has completed its Fall drill program (the “Fall Drill Program ”) on the Rockstone Graphite project located near Thunder Bay, Ontario (“ Rockstone” or the “ Rockstone Graphite Project”). The Company completed drilling of 4 holes, RS-22-01, RS-22-02, RS-22-03, and RS-22-04, totalling 800.0 metres. The initial goal of the Fall Drill Program was to confirm the initial discovery GC-12-01 discovery hole, which intercepted 25% Cg over 24 metres.
VIEW CORE GALLERY
The initial RS-22-01 drill hole, a twin of historic GC-12-01, intercepted a 3-metre, massive to semi-massive graphite lens (see core gallery). This graphite lens occurs within a wider 25 m pyrrhotite-chalcopyrite-pyrite rich interval hosting lesser graphite amongst the sulphides.
RS-22-03, a step-out of the historic GC-12-01 and RS-22-01 holes, four graphitic zones, consisting of semi-massive to massive graphite, were encountered in the following intervals (Table 1).
RS-22-04, a second step-out of the historic GC-12-01 and RS-22-01 holes, intersected a 10.9-metre interval of semi-massive to massive graphite from 86.0 to 96.9 metres, directly adjacent to 8.8-metre interval of massive sulphides from 77.2 to 86.0 metres, successfully extending the previously-announced graphite zone identified in RS-22-03, northward.
The total known strike length of the Rockstone graphitic unit is now approximately 80 metres and remains open along strike. Early observations suggest that the massive sulphide horizon
represents VMS-type mineralization.
“We are very pleased with the initial results from our Fall Drill Program on the Rockstone Graphite Project. With visible graphite intercepts in all 4 holes, we have a much better understanding of the graphitic structure and will be better able to determine next steps in exploration of this prospective project”, said Zayn Kalyan, CEO of Infinity Stone. “Following the anticipated return of core assays, our intended next steps will be to conduct downhole
geophysics, with the intention to do further drilling thereafter. Graphite is continually gaining more recognition as a key material in the production of the lithium-ion battery anodes, and we believe that supply will continue to tighten, particularly in the face of seasonal decline in production in China”, furthered Mr. Kalyan.
In addition to geophysics and further drilling on the Rockstone Graphite Project, the Company is also expecting to receive results in the coming weeks from its metallurgical program with SGS Canada Inc. (“SGS Labs”), in Lakefield Ontario, working to refine Rockstone graphite samples to a battery-grade of 99.8% Cg.
Table 1: RS-22-03 – Graphitic Intervals

About Rockstone Graphite Project
The Rockstone Graphite Project is located 45 km west of the seaway port at the City of Thunder Bay, Ontario Canada. The Project has excellent access by logging haul roads that connect to paved/gravel roads with nearby railways and a shipping port. Based upon the reprocessed Versatile Time Domain Electromagnetic (VTEM) survey completed by Sabina Silver Corporation in 2007, there are 18 drill-ready electromagnetic targets. Greencastle’s drilling in 2012 consisted of 4 diamond drillholes (916 metres). Diamond drill hole GC-12-01 intersected a 24 metre interval averaging 0.82% zinc and 0.15% copper within a graphitic argillite unit. Analysis of the pulps for the 24 metres returned a value of 25% Cg (graphitic carbon) using a LECO analytical procedure. Rockstone graphite morphology appears to be highly-ordered hexagonal graphite crystallites and crystallite agglomerates, likely formed by hydrothermal activity at a formation temperature of 702C.

Qualified Person
Technical information in this news release has been reviewed and approved by Case Lewis, P.Geo., a “Qualified Person” as defined under NI 43-101 Standards of Disclosure for Mineral Projects and a director of the Company.

About Infinity Stone Ventures
Infinity Stone’s mission is to be a diversified, single source supplier for the critical energy metals
being used in the clean energy revolution alongside its established SaaS solution portfolio. The
Company’s primary business units include HealthCheck (Stratum Health Technologies LLC) and
its energy metals portfolio. Infinity Stone is meeting the demand from battery and wind turbine
manufacturers, nuclear and hydrogen energy producers, and energy metals speculators by
acquiring 100% interest in critical mineral deposits and occurrences in stable mining-friendly
jurisdictions, close to final use destinations in North American manufacturing hubs.
To register for investor updates please visit https://infinitystone.ventures.
Infinity Stone Ventures Corp.
Zayn Kalyan
CEO and Director
zayn@altuscapital.ca
Direct: 778-938-3367
The Canadian Securities Exchange has not reviewed, approved or disapproved the content of this news release.
Forward-Looking Statements Disclaimer
This press release contains “forward-looking information” within the meaning of applicable securities laws. Forward-looking statements are statements that are not historical facts and are generally, but not always, identified by the use of words such as ” plans” , ” expects” or ” does not expect” , “is expected”, “budget”, “scheduled”, “estimates”, “forecasts”, “projects”, “intends”, “anticipates” or “does not anticipate”, or “believes”, or variations of such words and phrases or state that certain actions, events or results “may”, “could”, “would”, “might” or “will be taken” “occur” or “be achieved”. Such forward looking statements necessarily involve known and unknown risks and uncertainties, which may cause actual performance and financial results in future periods to differ materially from any projections of future performance or result expressed or implied by such forward-looking statements, including statements respecting future exploration work. Although forward-looking statements contained in this press release are based upon what management of Company believes are reasonable assumptions, there can be no assurance that forward-looking statements will prove to be accurate, as actual results and future events could differ materially from those anticipated in such statements. The forward-looking statements may also be affected by risks and uncertainties in the business of the Company, including those described in the Company’s public filings available on www.SEDAR.com. The Company undertakes no obligation to update forward-looking statements if circumstances or management’s estimates or opinions should change except as required by applicable securities laws. The reader is cautioned not to place undue reliance on forward-looking statements.